The music in the new Amazon Lion-Dog commercial is so annoying I had to change it, which is a shame because usually I blindly love any commercial that has a dog in it. But when the dog video is underscored by a cloying, breathy, contrived bit of treacle I hit the mute button as fast as I can. Instead of soulful and emotional it’s more like fingers on a chalkboard to me.

Am I heartless? Am I MADE OF STONE!?

No, I’m a musician. I sing. Which helps me recognize the gimmicks and tropes people use to get a cheap effect out of a piece of music. Every time I hear music like this I feel like I’m watching a cut-rate magic show, saying to myself “I can totally see the wires.”

I like magic, and I like to be surprised and amazed, and even a kid’s party magician can put on a good show if he or she has skill and style and is performing from the heart. But don’t expect me to appreciate the trick just because you’re doing the trick. Hide the wires. 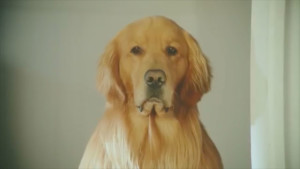 This is hilarious. Great job on the music!