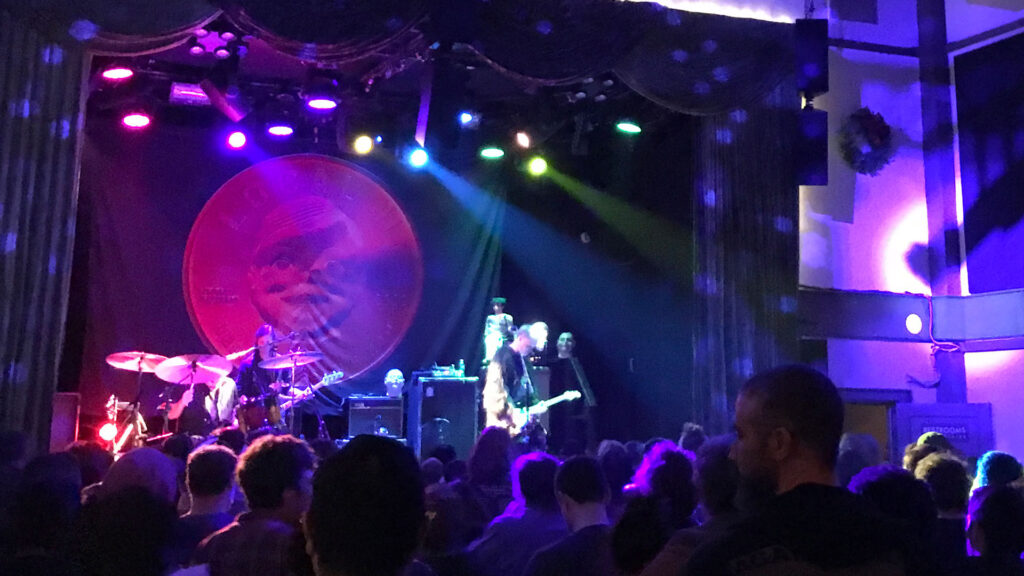 I just found out that the New York Daily News on Monday, January 27 printed a tweet of mine! Pretty sweet!

It was from the previous day when the Rangers played the Devils in an NHL hockey game at Yankee Stadium. Here’s the tweet:

The NY Rangers & NJ Devils are playing the 1st ever hockey game at Yankee Stadium, before the game the NHL suspended A-Rod just to be safe.

And here it is in the Daily News the next day: 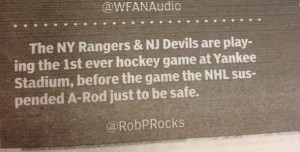 Special shout out to my friend Michele Carlo for saving me a copy!

2010 was my first full year of tweeting! There were some fun posts, some road pictures, and hopefully enough jokes to justify hitting the ‘refresh’ button every once in a while.

So, in case you missed them, or you think twitter is annoying (it can be) and you haven’t been following my feed, here are MY FAVORITE TWEETS FROM 2010!

Jan 9
RobPRocks enjoys the fact that whenever WE TV promotes an upcoming show they have to say “tonight, ennui.”

Jan 19
They say everything happens for a reason, and sometimes that reason is to piss you off.

Feb 4
FYI, they’re going to know you’re a Northerner when you ask for one collard green.

Feb 5
My check engine light really needs to be more specific. I checked the engine, it’s there.

Feb 22
I saw a cell tower that had fake branches on it to make it look like a tree. I played along and disguised my phone as a pine cone.

March 11
“Bottle service” is just a nice way of saying “we’re reserving this section for jackasses.”

March 17
The bagpipes are truly awful instruments. I think it’s why people drink so much on St Pat’s.

March 22
I hope we all can at least agree on this: Glenn Beck has been a boon to the chalkboard industry.

May 21
American Apparel is $91 million in debt. What’s that, like two t-shirts?

June 9
She said, “you’re pretty quiet off stage,” to which I replied, “I’m pretty quiet on stage, it’s just that I have a microphone.”

June 25
Local diner put an orange, parking ticket-sized flyer on my car. I taped a thank-you to their window the shape of a health code violation.

Aug 3
My 1st post-college apartment was very crate & barrel, but only if you use the name literally.

Aug 27
Why are one-trick ponies a bad thing? It’s already a pony AND it knows a trick!

Sep 9
Had to explain to a friend that you don’t just ‘declare’ bankruptcy, there’s actually paperwork involved.

Oct 27
Hollywood horror films have no effect on me. If they really want to scare me they should make the film “Uninsured Abdominal Pain”

Dec 11
You can spell acid wash” without “ass” but you can’t say it.

Dec 18
Hangin with video golfers against my will ‘cuz I thought the sign said “Golden Tee nowhere” instead of “now here.” stupid bad spacing.

Dec 22
The Maya said the world ends in 2012 but they also thought the universe was a turtle so, you know, grain of salt.