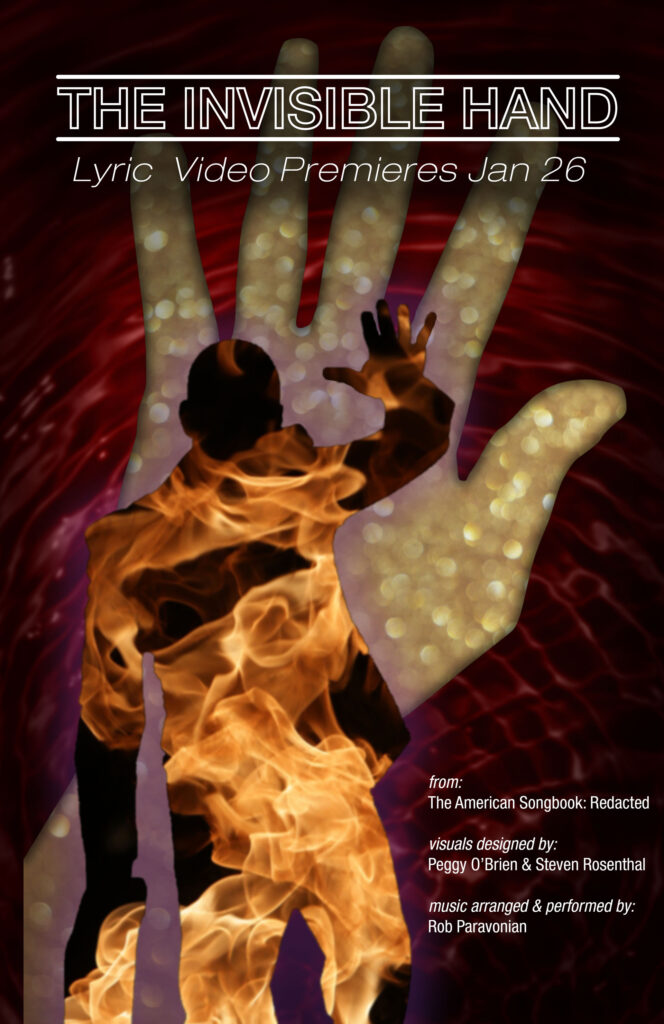 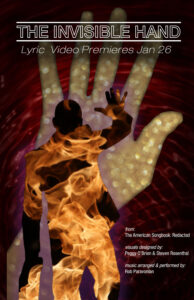 One of my favorite tracks on The American Songbook: Redacted studio album is The Invisible Hand, a 60s-era James Bond style theme song about Adam Smith’s famous metaphor for laissez faire capitalism. The joke being that “invisible hand” sounds like some kind of underworld organization that you’d find in a James Bond movie (fwiw I wrote and performed the song before a secretive organization named The Invisible Hand appeared on the animated spy comedy Archer).

When it came time to record a studio version of the song I wanted an arrangement that sounded as much like a classic James Bond theme as possible and I’m really proud of the orchestration and performance I put together.

When I did the song live in the debut performance of the The American Songbook: Redacted, I had a very simple slideshow animation projected on the screen behind me. My good friends Peggy O’Brien and Steven Rosenthal, amazingly talented filmmakers, asked if I had thought about doing a video montage in the style of a James Bond title sequence. I said I had but added that my video and after effects skills probably weren’t good enough to do something worthy of the arrangement I hoped to put together.

Lo and behold, they offered to put together something, and what they delivered was so unbelievably cool that I wanted to do more with it than project it behind me in the live show. With their permission I put lyrics over their great visuals to create a lyric video for the song. It’s the 4th lyric video from AS:R after Satanic Panic, The Great Disappointment, and The People Who Were Already Here, and it will be released on Thursday, January 26 at 9pm NYC time, 0100 Friday, 27 of January GMT.

There may be a live stream on premiere night, I’m still figuring out what to do (and I need to reconfigure the laptop I used to stream all those Cover Tuesday shows after an operating system upgrade) so stay tuned, I’ll update here and post on the various social medias that I still can tolerate (post, mastodon and instagram).

Update! (Jan 26, 2023, 2pm EST)
The premiere is tonight at 9pm NYC time and I’ll be doing a 30-minute pre-premiere live stream to talk about the video, James Bond Themes, and maybe even laissez faire capitalism if people are into it! Here’s the lyric video will be here, and will go live at 9PM, and the pre-premiere live stream will be on YouTube and Twitch! Come through if you can!

It such a cool video, I can’t wait for you to see it! Until then, check out the cool arrangement in one of the embedded players below 🙂