A little song about Henry Ford 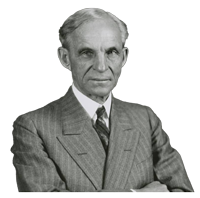 We all know Henry Ford as the car guy, the man who adopted the assembly line, made affordable cars, and whose company changed transportation and manufacturing, but did you know he had some strong opinions about music?

He hated the popular music of the teens and twenties, what was starting to be called jazz. He thought it was crude, vulgar, a bad influence on young people, and he blamed its popularity on a Jewish conspiracy. He blamed a lot of things on the Jews. So many, in fact, that he bought a newspaper and had them publish a weekly anti-Jewish column. It ran for 91 weeks.

So I figured the best way to make fun of all of this ridiculousness would be to write Henry Ford a 1920s-style jazz song. It’s featured in my new show The American Songbook: Redacted!