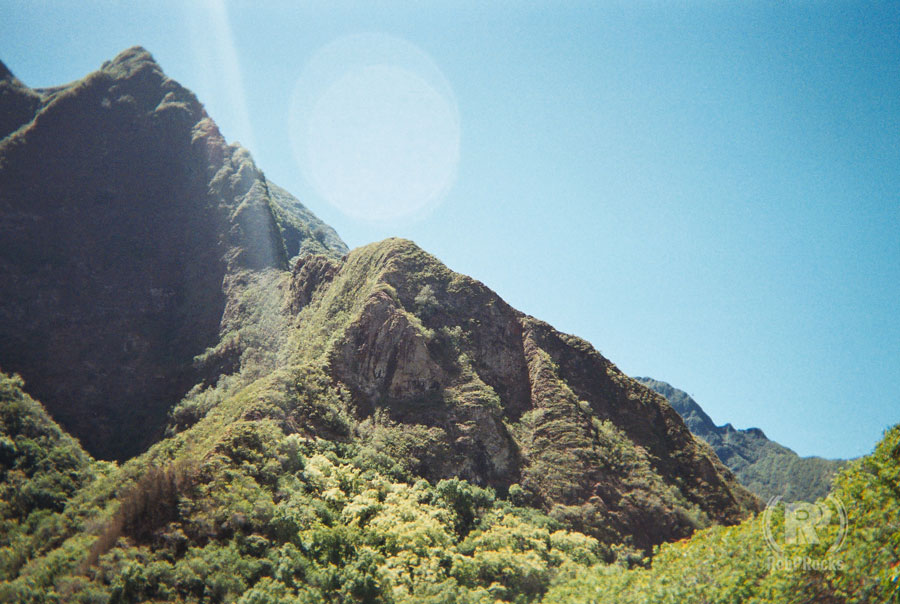 The U.S.’ 50th state was also my 50th state! I was stuck on 49 for several years and was wondering if I’d have to resort to going there on vacation and doing an open mic just to say I’d performed there. But in 2010 not only did I finally landed a gig in Hawaii, the show was on my birthday! The wonderful people at B.Y.U. Hawaii brought me in for a show on their campus on the north shore of Oahu and I flew in a week early to try to see a bit of the state.

My week in Hawaii started with a weekend in Honolulu where I stayed in Waikiki Beach and explored the city. I poked around the beach, hit a couple of parks, and had a Mai Tai at the Outrigger Reef hotel where one of my sisters had her first big singing gig about 20 years prior.

When planning my trip I had to decide if I wanted to island hop, and if so, which island to I hop to. I chose Maui because I wanted to do some snorkeling and Molokini, a small crescent shaped island formed from an ancient volcano cone, is just off the coast of Wailea. I stayed up the shore in a groovy older motel called the Aston Maui Lu*, in a great town called Kihei. I checked out Iao Valley State Park, sang karaoke at a restaurant bar, and sailed on a catamaran for a snorkeling trip. Sadly it was too windy for the catamaran to navigate the Molokini crater, but I got to snorkel in some great reefs, saw a sea turtle, and the crew threw up the sail in the strong winds and I got to experience a pretty thrilling ride.

I flew back to Oahu the day before my show at BYU Hawaii and a couple of very helpful and friendly students met me at the airport and drove with my up to Laie, where they treated me to the infamous local dish called the Loco Moco—a hamburger patty served over a plate of rice and covered with a friend egg and gravy.

The show on my birthday was so much fun and was a great way to wind up an amazing week. The audience included students and people from town, and after the show the student activities advisor told the crowd it was my birthday and they all sang “Happy Birthday” to me to end the night. After the show I hit the hotel bar—oh, I didn’t even mention, they put me up at Turtle Bay, the resort where they filmed Forgetting Sarah Marshall!

So yeah, I had a great week in Hawaii and it was a memorable way to check all 50 states off of my to-do list. I am looking forward to returning and seeing more islands.

Top Row, left to right: Waikiki selfie with Diamond Head in background; Color Polaroid of Maui sunset; Getting my Hunter S. Thompson on while sailing in Maui; Molokini crater.

Bottom row: Rocks at Waimea Beach and yes, I jumped! Polaroid of a shrimp shack at a shrimp farm on the North Shore of Oahu.

*when going back to find the name of the groovy motel that I liked so much in Kihei I started poking around on google maps in the area to read the names of the hotels, sure I would remember it once I saw the name. I couldn’t find it. I switched to satellite photo mode. I saw a large, bulldozer area of land by the beach, a construction site.

The spot was labeled “Maui Bay Villas by Hilton Grand…” and I had a sinking feeling that the funky mid-century motel I dug so much had been bulldozed for a new corporate resort. I searched my old emails for a receipt to get the name and address of the motel: The Aston Maui Lu at 575 S. Kihei Rd.

I entered the address in google maps and it put the pin right smack dab in the middle of the construction site. Turns out it’s a friggin’ timeshare slated to open Spring of 2021.