American Cheese in an album that’s near and dear to my heart because it’s the first one I recorded entirely in my own studio. Though the 1998 technology was limited and I was relatively new to home recording, I think some of the arrangements and performances hold up. The backing vocals in songs like Yuppie Camper, Reunion Song, and He’s Got Coke still make me happy, and in the Disco Song I think I got a lot out of my limited resources.

It was recorded on an ADAT XT20 digital tape machine (8 tracks) that were synced (via a MOTU Timepiece) to little black and white Mac Classic computer running 16 MIDI tracks on an app called Master Tracks Pro. Wow, that’s a lot of old tech on one sentence! The guitars, bass, and vocals were live and most of the MIDI instruments were coming from an Alesis QuadraVerb rack unit.

American Cheese has some early notable songs that I became known for, including “He’s Got Coke” which I played on Comedy Central’s Premium Blend in 2001; Ritalin and Yuppie Camper, which got played on the Dr. Demento Radio Show; and the track titled “Pachelbel” which is an early recording of the piece that became popular on the Dr. Demento Radio Show and laid the groundwork for the viral success of the Pachelbel Rant video on YouTube years later. 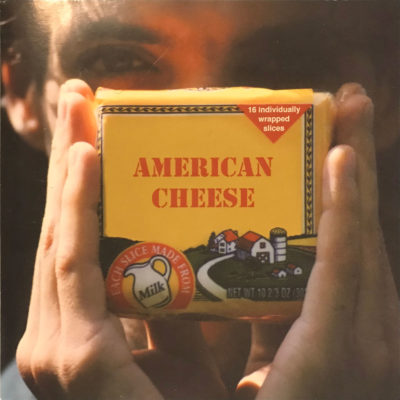