Living it Down, or, more officially “Songs From and Inspired by the Hit T.V. Series Living It Down” is a moment captured in time. Recorded in the summer of 2001 and released in the winter of that year the album covers the dot-com bust, early cellphone social habits, and the era of Friends and hour-long teen dramas on networks that no longer exist.

The album kicks off with a “TV Version” of a television show theme song and goes on to chronicle young professional angst in songs like Particle Board, HMO, Wasting My Minutes, and Reality Virus.

The album was recorded in the summer of 2001 in Rob’s home studio, with drums recorded at various NY studios played by Joe Abba (tracks 6, 8, 11, and 14) and Linda Pitmon (tracks 2, 3, 9, and 10). It was “in the can” by late summer and released in December with an 8-panel insert containing all of the lyrics. 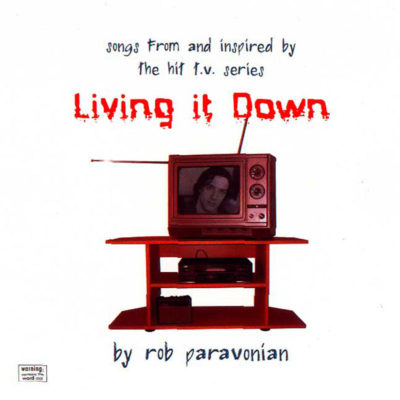