I love the way home security commercials play on the fears of the audience so I just went full bore with this week’s 52 Sellout, taking all of the right wing, talk radio fear mongering and directly using it to sell a home security system.

There really is a lot in common between right wing talk radio and home security marketing. Right wing radio riles you up and gets you angry and afraid so you’ll listen to 3 hours of blather and be susceptible to commercials hawking gold investments and underground bunkers, while home security commercials try to subconsciously emasculate its male audience, making them feel that they’re not strong enough to defend their homes against the outside world without a new perimeter defense.

Musically I kept it simple, a tense synth pad, to let the dialogue and story come through clearly. I did have fun recording the audio and voiceover, especially getting my Rush Limbaugh on for the radio DJ and then EQing and distorting the track to make it sound like it was coming through an AM radio.

I hope you like it, and remember, fear is a gift but it’s also something people use to control you! 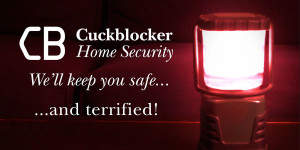