This weekend I performed for a crowd of Klingons, hobbits, wizards, and several incarnations of Dr. Who; and at the hotel were a full-size remote control K-9 and Dalek, panels on anime, and room parties with Wizard of Oz, 1970s, and The Big Lebowski themes. Hopefully by now you’ve guessed that I was at a sci fi convention. More specifically I was at MarsCon in the Twin Cities, a great fan-run sci fi con with an entire comedy music track curated by Luke Ski and others.

There were fun performances all weekend long with Dr. Demento regulars like Devo Spice, Sponge Awareness Foundation, The Great Luke Ski, TVs Kyle, Carrie Dahlby, Power Salad and many more. I had a great time performing because the crowd at MarsCon really knows and loves comedy music and they enthusiastically support it like no other group.

The themed room parties are a blast too. As you make your way down the hall you can have a shot with a Klingons in their spartan room, a white Russian in The Dude’s Abode  while The Big Lebowski plays on a loop, and then a hot chocolate with the Manticon folks dressed as marines from a series of novels by a sci fi writer named David Weber. Up and down the halls are elves, Star Trek officers, anime characters and more.

The creativity of everyone there is one of the things I loved most, fellow performers have podcasts, animated web shows, and music projects; several of the attendees have elabroate costumes that they made themselves, and you even see parents and kids participating in events together. 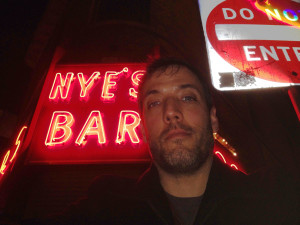 I even had time for a quick extra-conventional sojourn, taking the Twin Cities’ relatively new Metro light rail to downtown Minneapolis to Nye’s Polonaise, a polka bar that’s been open since the 1950s and sadly will be closing its doors this year. I had a quick bite, listened to a set from The World’s Most Dangerous Polka Band, and then made my way—amongst the throngs coming out of a Timberwolves game—back to the hotel in Bloomington to revel with wood nymphs, steam punks, and various ogres, demons, and off-world types.

I can’t thank the MarsCon folks enough for treating me so well and inviting me to such a fun convention. As the Musical Guest of Honor I was truly honored to be there and very grateful to have been a part of it. If this kind of thing sounds fun to you get in touch with the MarsCon folks and get yourself there in 2016.