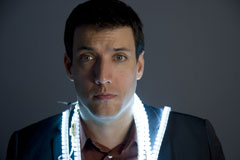 Rob Paravonian, well-known for his popular Pachelbel Rant, is a comedian, musician and writer who performs all over the U.S. and throughout world.

Rob has released several CDs and has received millions of views of his videos on YouTube. In addition to performing standup across the country, Rob created 3 solo shows, has written one-act plays that have been produced in New York, and regularly writes for New York-based sketch group Spurn.

Check out Rob’s bio page, his credits page, and this interactive map of places he’s performed!